This year, the National Hardware Show in Las Vegas was a great success. Despite being adjacent to the low-trafficked International Sourcing Section, we are able to attract a lot of attention to our security locking mailbox product line with the help of a remote control Mail Boss (seriously!) and a lot of enthusiasm.

Here are some pictures from the Mail Boss Locking Mailbox Booth #37538. 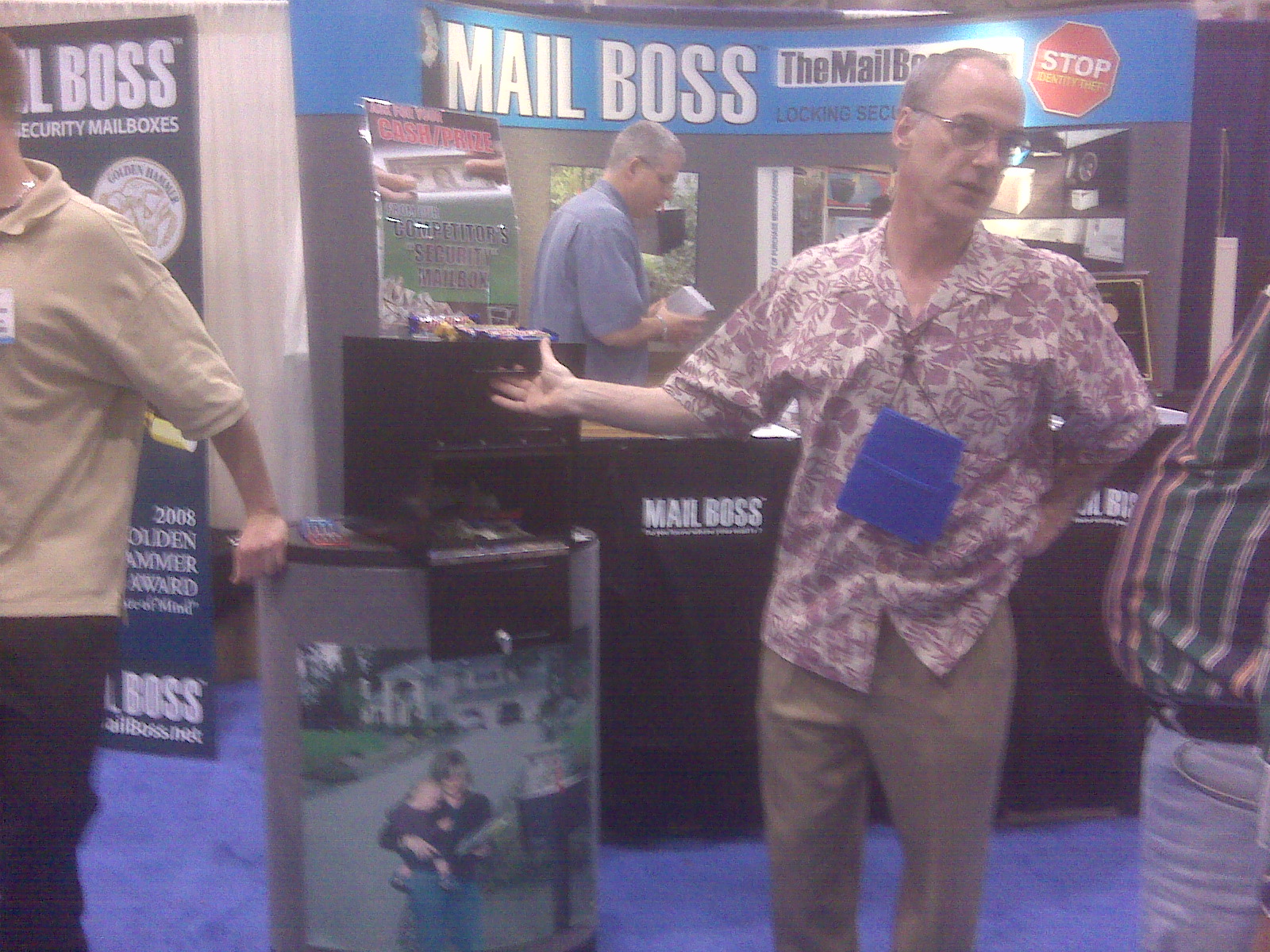 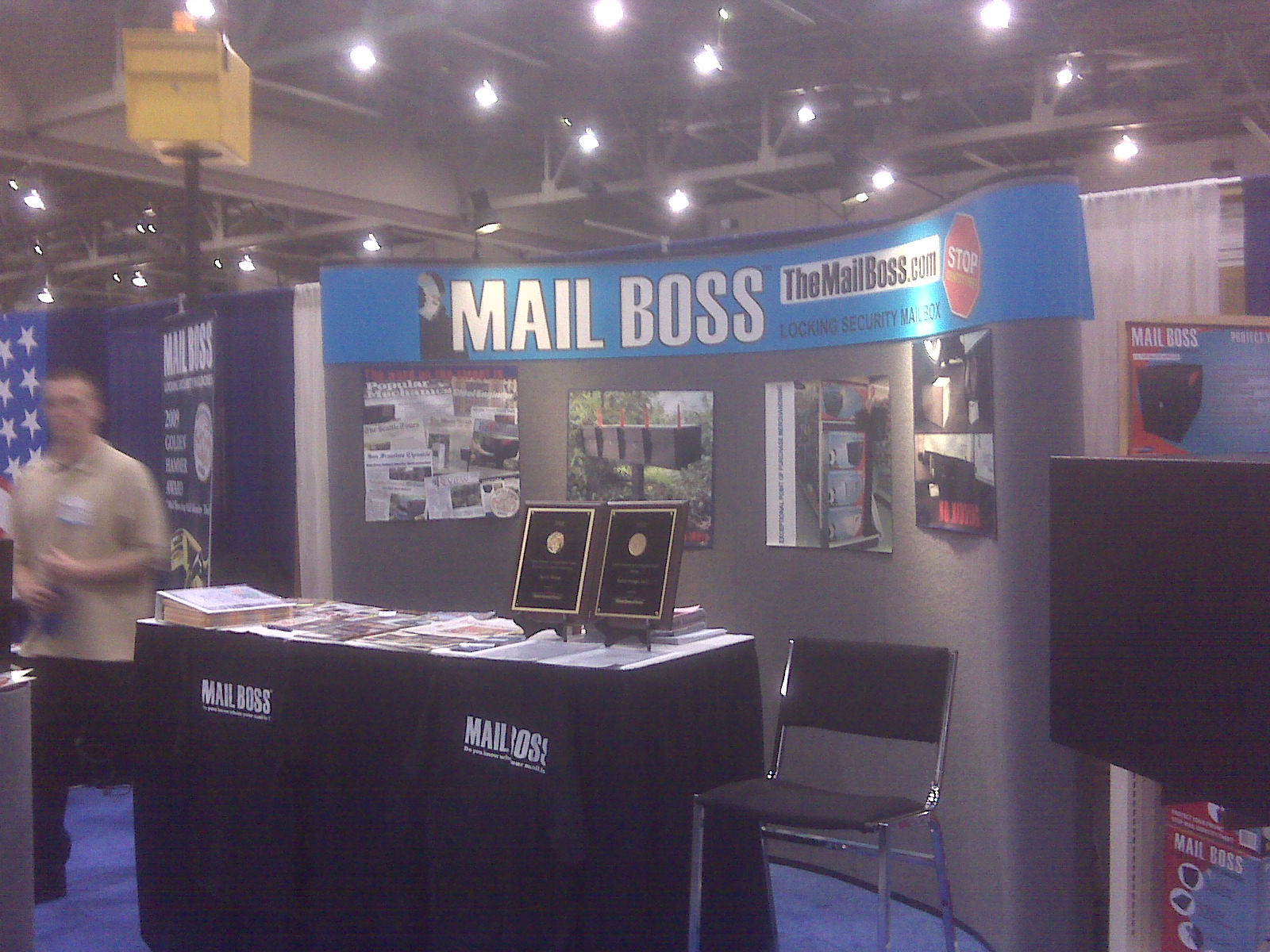 SOME HIGHLIGHTS FROM THE NATIONAL HARDWARE SHOW:

The 25th Golden Hammer Awards ceremony, presented by Home Channel News, was held Tuesday evening in the Las Vegas Convention Center. The reception included cocktails and appetizers while a Bono impersonator entertained attendees with covers of popular music by U2. Suppliers in 32 product categories were honored… and then came our time in the limelight. I accepted the award on behalf of Mail Boss for exceptional Point-of-Purchase Signage. (For details on the Mail Boss 2009 Golden Hammer award, click here). 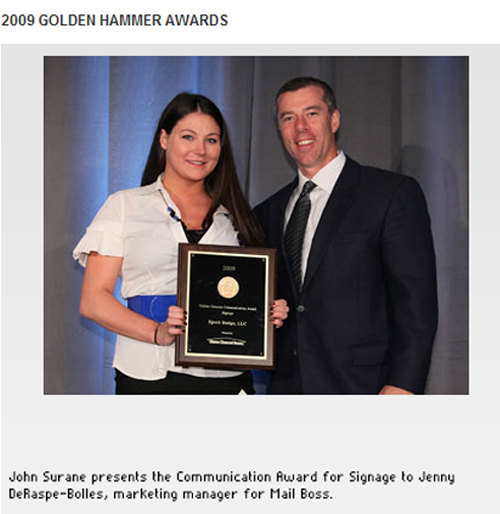 After launching our @MailBoss Twitter account (details here), we made some #NHS09 contacts who wanted to “Tweet Up” at the Envy Steakhouse after the show on Wednesday. There were plenty of interesting tweople (?) and it was nice to put faces to @names. At the Tweet-Up we met two noteworthy exhibitors with very cool products:

If you have problems with leaky sprinklers causing out of control water bills, or pesky insects wreaking havoc, definitely check out these folks!

May 7: Mail Boss “On the House” with the Carey Brothers

On the final day of the National Hardware Show, the Mail Boss locking mailbox was featured in a radio broadcast of “On the House” with the Carey Brothers. The segment, recorded in the Convention Center, was aired on live radio Saturday May 9. To see the Carey Brother’s show notes, click here. For more information and to listen to the segment, click here.

The National Hardware Show has always been an exciting tradeshow for us. While it is not generally an event at which we bring on many new Mail Boss dealers, we do manage to get noticed by some important people… and this show was no exception. So while we may leave Vegas a few dollars down, we always look forward to next year!