Blogging live from the MidStates Convention in Minneapolis, Minnesota. Here is this week’s round up of mail theft, from Alaska to Virginia and everywhere in between.

(ANCHORAGE, ALASKA) “A Kongiganak woman was indicted by a federal grand jury in Anchorage for mail theft, announced Karen L. Loeffler, U.S. attorney in Alaska, according to a written statement from Loeffler’s office.

Agnes Evan, 26, was arraigned today before U.S. Magistrate Judge Deborah Smith on the charge of mail theft, contained in a one-count indictment. Ms. Evan pled not guilty to the charge. […]

Assistant U.S. Attorney Yvonne Lamoureux, who presented the case to the grand jury, said the law provides for a maximum total sentence of up to five years in prison, a fine of up to $250,000, or both, and that the government would be seeking restitution in the amount of $10,000.

Under the Federal Sentencing Guidelines, the actual sentence imposed will be based upon the seriousness of the offense and the prior criminal history, if any, of the defendant. Magistrate Judge Smith set a trial date of Nov. 1.

The United States Postal Service Office of Inspector General conducted the investigation leading to the indictment in this case.

An indictment is only a charge and is not evidence of guilt. A defendant is presumed innocent and is entitled to a fair trial at which the government must prove guilt beyond a reasonable doubt.”

COMMENTS: Alaska – particularly Fairbanks but also Anchorage – has been plagued with mail theft. Unfortunately for those in “The Last Frontier” looking to prevent mail identity theft with the MailBoss, Epoch Design does not ship outside the continental United States. However, you should be able to find the MailBoss security locking mailbox in Anchorage at Fred Meyer or Spenards. Happy (mailbox) hunting!

(WEST FRANKFORT, ILLINOIS) “The Williamson County Sheriff’s Department has arrested a West Frankfort woman in connection with a string of mail thefts that have occurred throughout the area in recent months.

Jessica Stubblefield, 29, was taken into custody after police learned that the occupant of a late model sport utility vehicle had stolen mail from a rural Williamson County resident’s mailbox.

Police located and stopped the vehicle, which was driven by Stubblefield. During a subsequent search, officers discovered mail stolen from several area residents.”

COMMENTS: Thanks to vigilant residents, one more mail thief has been caught. However, mail theft is on the rise, and savvy criminals know that majority of US mailboxes are unlocked, offering a treasure trove of information for identity theft. Keep would-be identity thieves from obtaining your personal information and protect your mail at its source: the curbside mailbox. The best solution to prevent mail identity theft? A high security locked mailbox like the Mail Boss that can’t be fished by hand or pried open with a screwdriver. The Mail Boss is affordably priced and available at your local hardware store.

That could include missing mail or receiving unexpected or unusual items around their mailboxes, said Lt. Tim Voris, who heads the Sheriff’s Office Detective Bureau.

“If anybody has had a mail theft, or finds anything unusual in the area of their residence, like mail that doesn’t belong to them, or unusual activity around their homes, contact the Sheriff’s Office for a report,” Voris said.

Three men recently were arrested in Hocking County, where they face charges in connection with mailbox thefts in that county. Voris said the case could involve almost 500 mailboxes in Hocking County and 200 in Fairfield County, with targeted locations being Amanda, Hocking, Madison and Berne townships.

Just two weeks ago, sheriff’s officials tallied the number of affected residents at just four. But, a woman who had not been charged in the mail thefts identified several roads in the county she said the three men had targeted, leading officials to think the number of victims is closer to 200.

That woman drove the men around as they hit dozens of mailboxes on several roads, authorities said.

In one Fairfield County sheriff’s report, a victim’s mail had been opened and stuffed inside a shipping envelope and left on his porch. Voris said the thieves cashed residents’ checks and took mail that helped them obtain money.

The rash of thefts has stopped, he said.

“We’re not seeing a series of thefts like we were seeing with this group.”

Those arrested in connection with the mailbox thefts were Shaun Mowery, 29; Jeffery Rollins, 40; Joseph Romine, 28, all of Lancaster.”

COMMENTS: Mail theft is always grossly underestimated, because most victims never realize when their mail has been stolen. Then, even when people do have their mail stolen they often don’t know what to do about it. Rarely are mail thefts reported to the police unless there is media coverage or a heightened awareness of the problem. (Side-note: Here is what to do if your mail is stolen.)

Anyway, this story is a case in point. Originally, police estimated there were only four victims. Now, they estimate there are over 500 victims in Hocking County, and 200 victims in Fairfield County. Of course, this still may not be representative of the total number of victims.

In reality, many people who had their mail stolen may never become victims of identity theft. However, their information is out there and they will have to take precautions – i.e. issue credit alert, etc. – to ensure their good name remains untarnished. Translation: mail theft is a major pain in the a$$.

The best way to protect your mail from being stolen is with a high security locking mailbox like the MailBoss that can’t be fished by hand or pried open with a screwdriver. With the MailBoss, your mail is secure until you retrieve it with your unique key. Peace of mind at an affordable price! 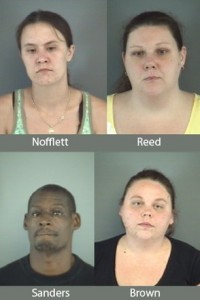 (STAUNTON, VIRGINIA) “Arrested for the fifth time this month a Staunton woman topped more than 30 charges in a mail theft case, police said.

Staunton police arrested Melissa “Joy” Nofflett, 33, of Staunton, Thursday on charges of hit and run, reckless driving, forgery, larceny and violating the terms of her release from jail, authorities said.

“On [Tuesday] she went into a store to attempt to purchase cigarettes with cash and a check,” said Officer Lisa Klein, Staunton police spokeswoman.

“They recognized her and refused to cash the check.”

According to documents filed in Augusta County Circuit Court, Nofflett and several others stole checks from mailboxes and put them through electric check transfer machines at area Food Lions to get cash back.

Staunton police Officer J.L. Campbell interviewed Nofflett on Thursday, where she named Hillary Reed, 31, of Staunton, as her latest accomplice, according to a search warrant.

“Nofflett, who has already been charged previously over the last few weeks, admitted to conducting more criminal activity,” the warrant states.

Nofflett told Campbell she and Reed “smoked crack cocaine” at Reed’s apartment Aug. 17, then drove a car down a street and hit a mailbox.

According to the warrant, Reed got out of the car and retrieved two checks from the mailbox and tried to cash them at three different Food Lions.

“The computer information is important if they used the victim’s identity on the Internet to defraud the victim,” Campbell wrote.

Reed is charged for a mail theft on Summit Drive and Brown for a theft from Hopeman Station, both of which occurred July 26, police said. The charges include larceny, forgery, uttering and obtaining goods by false pretenses.

The women were charged earlier this month in Staunton along with Nofflett and Dion Lamar Sanders in similar cases.

COMMENTS: This is why you do not release these career criminals. Charge them and book them or they will be out on the streets targeting mailboxes in no time. Mail identity theft is how they fund their drug habit; it’s their way of life. A slap on the wrist and probation is not going to stop them.

Since you can’t count on the courts to keep these addicts behind bars, homeowners need to take measures to protect themselves and their credit. The first and best defense against mail identity theft is a high security locking mailbox to keep thieves’ hands off your personal information. The Mail Boss is a high quality lockable mailbox that can’t be fished by hand and resists leveraged entry. Also, no one should send checks or other sensitive mail from an unlocked mailbox. Bring outgoing mail to the post office or better yet, use online bill pay. It’s more secure.

(MONTEREY COUNTY, CALIFORNIA) “Aug. 17, 9:11 p.m.: Someone found mail apparently stolen from five different homes in a field in the Toro Park area. The mail is thought to have been stolen between noon Aug. 16 and 9:40 a.m. Aug. 17. Some of the mail had been opened, most likely by thieves looking for checks, deputies said.

COMMENTS: Most mail-identity theft stories report that thieves are allegedly looking for checks. However, this is not always accurate. Often times thieves are looking for any personal or financial information. They find these sensitive documents useful for identity theft, from which they can garner far more than a measly fraudulent check. Incoming mail generally offers more information thieves can use, so they often target curbside mailboxes searching for account numbers, credit card statements and more. To protect yourself from mail identity theft, you need to secure your incoming (as well as your outgoing) mail. The solution? The Mail Boss high security locking mailbox!