Following in the footsteps of A&E’s most watched TV series of all time, “Storage Wars,” another reality show pits truck drivers against each other in order to get the bid for oddball shipments. Each episode, the cast of characters log into a shipping auction website to explore the freight needs of the week. They then decide if it’s an item they would like to bid on. Once the negotiating is done and the hauler is decided upon, the action begins.

Whether they’re hauling a temperamental camel, an enormous gnome or a commercial airplane, something always tends to go wrong. One day it’s an ornery shipper, the next a load too heavy for their trailer. It got me thinking … What other bizarre items have raised the eyebrows of moving companies and postal workers? 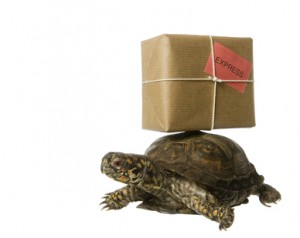 The Huffington Post reports that eighteen plastic-wrapped human heads were found by U.S. customs officials at the Chicago O’Hare airport Jan. 14, 2013. The embalmed heads are reported to have arrived in three coolers from a research facility in Italy. The human heads, with skin intact, were transported to the medical examiner’s office. Fox32 News reports there is no indication of foul play.

Requiring an ocean shipping service, sea creatures need to get from here to there at times, too. Because of a renovation project, the Shedd Aquarium in Chicago needed to move some precious cargo beluga whales to the Mystic Aquarium in Hartford, CT. The transport was made by guiding the animals on a stretcher and into a special water-filled carrier (kind of like a large bathtub). Their trainers and marine mammal staff members traveled with them to make the journey more comfortable and less stressful for the the mammals.

Popular Mechanics says that you can, in fact, ship the nasty little creatures with the stipulation that it must be for research and clearly labeled, “live scorpions.” This is by American standards.

There are reports (Popular Mechanics again) of several unsuccessful attempts of people trying to ship … themselves. And then there are the success stories. W. Reginald Bray was an Englishman who liked to ship curious objects. After mailing a penny, a slipper, seaweed, shirt collars and an Irish Terrier none of which were boxed or packaged, but they were properly addressed with postage affixed Bray stuck a stamp to his forehead and was twice delivered to his destination (in 1900 and 1903) by postal carriers who walked beside him.

The Smithsonian National Postal Museum explains how the Titanic’s famed Hope Diamond was mailed from NYC jeweler Harry Winston’s jewelry store in an everyday, ordinary package for a total of $145.29 that’s $2.44 for the package and $142.85 for the million-dollar insurance.

You might be surprised by this, but there are countless websites dedicated to the shipping and unpacking of a chameleon. Who knew? You must know though, that it is illegal to mail a chameleon out of the state of Hawaii, they must be hand carried. Nor are they welcomed into Hawaii because they prey on the native insects, according to the State of Hawaii’s Department of Natural Land and Resources. Most other states allow for chameleon shipping. The box should be insulated with a “live reptile” and “perishable” sticker on it, explains chamalotchameleons.com.

Posted in Just for Fun and tagged funnies, guest bloggers