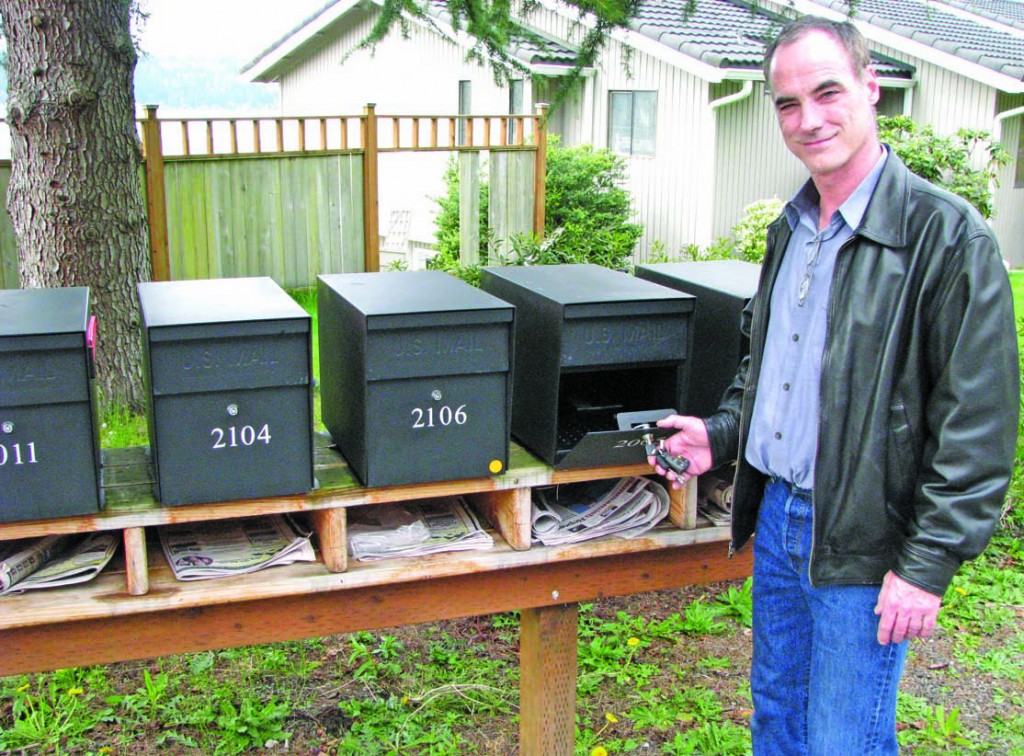 David Bolles was tired of having his mail stolen. After falling victim to several instances of mail theft, he decided it was time to upgrade his mailbox two years ago.

“That’s kind of what compelled me to take a look at this seriously,” said Bolles, who lives with his wife Monica and son Gabriel on East Lake Sammamish Place. So he visited local hardware stores and investigated various locking mailbox options.

“There was one product that looked like it was okay,” said Bolles, who expressed disappointment about how easily one could pry open locking mailboxes with a rudimentary screwdriver. “I thought, I’m not seeing what I like. Maybe I ought to make one.”

Bolles owns a children’s furniture design company called Epoch Design in Woodinville, and he guessed that along with his 16 employees, he could create a more secure mailbox. Thus, the Mail Boss was born.

A sleek black box large enough to house a phone book, the Mail Boss has a steel frame with a recessed door that resists attempts to pop it open with a screwdriver. It also boasts a cylindrical key, which makes it harder to pick.

Bolles now sells his locking mailbox model in 200 retail locations on the West coast, from California through Washington. The Mail Boss constitutes about 25% of the 10-year-old company’s business, according to Bolles.

As with Epoch Design’s other products, Bolles’ employees construct small quantities in Washington, and then mass-produce the items in a factory north of Shanghai, China.

Last November, Popular Mechanics magazine reviewed the product, calling it “Postbox Maximus”. “While some locking boxes can be opened with a screwdriver, the Mail Boss is a postal fortress,” the review said.

Tim Koch, a manager at Ace Hardware in Sammamish, is a fan of Bolles’ invention. “They’re theft proof pretty much,” said Koch. “If you took a stick of dynamite to the thing, you could probably get inside.”

Koch said that the Mail Boss and other similar locking mailboxes fulfill a need in Sammamish for guarding for guarding against mail theft. “In the last couple years, with all the news and the hype, and we have a fair amount of mail theft here on the Sammamish plateau,” explained Koch, who installed a Mail Boss at his residence six months ago. Koch said his store has sold about 78 of Bolles’ model since August of 2006.

Gearold Dargitz, who lives on 211th Place Southeast, bought a Mail Boss one year ago. “I found some empty envelopes scattered along the road,” said Dargitz, explaining how he discovered that someone had rifled through his mail. “To this day we don’t know what was stolen.”

Dargitz has lived at the same residence for 46 years, and in that time has suffered five mail thefts. “After the third of fourth time you do that, you get a little smarter,” said Dargitz. “This box, they would have to go through a lot of work to get the mail.” At the north end of his street, Dargitz said about 10 of his neighbors decided to purchase a series of locking mailboxes around the same time.

Part of the problem with mail theft in Sammamish is that its sprawling suburban neighborhoods, with expansive front yards, trees and long driveways removes a layer of security. Dargitz said cedar trees block the view of his mailbox from his house unless he looks out his bedroom window.

“Rural areas are more susceptible to mail theft as opposed to Klahanie or downtown,” said Anneke Broeder, a mail clerk at the Issaquah Post Office. “Most of the time, it’s the boxes that are not locked.”

It is no secret that mail thieves prey upon Sammamish residents. The Sammamish police department filed a case March 19 with the King County Prosecuting Attorney’s Office alleging a local man had committed more than 150 acts of identity theft. In that case, the suspect scoured unprotected mailboxes for checks he could later cash in nearby banks.

Roads like State Route 900 and Issaquah-Fall City Road are examples of vulnerable areas likely to be hit by mail thieves, Broeder said. “We tell the people not to put flags on the boxes because that will tell people that there’s mail in the boxes, possibly with checks,” explained Broeder.

Bolles said he recalls seeing a recent local news segment on television about mail thefts in Seattle. The story seemed to conclude that residents could not protect their mail, he observed. “Well there is a solution. There are a couple locking mail boxes that are really secure, and ours is one of them,” said Bolles.