Ken in Chesterfield New Jersey was pleasantly surprised when his mailbox was the only one to survive a recent bout of vandalism in the neighborhood. All the mailboxes in the neighborhood were destroyed, apparently by 15 lb pumpkins hurled at 35 mph. But not Ken’s mailbox! Ken, you see, has a Mail Boss.

His flag did take a bit of a beating, so we have taken the liberty of sending him a new one, on us. 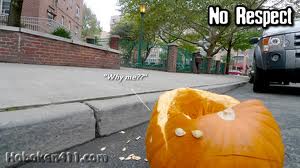 Here’s what Ken had to say:

I was recently the victim of vandalism.  The local PD caught the suspects.  I have to say, other than the mailbox getting knocked off “level” and the door sticking because the door was bent, I only lost the mail flag.  The mail boss survived a 15 pound pumpkin at 35 mph.  I did not even think to take pictures of the smashed pumpkin scattered after the incident.  13 of my neighbors had their mailboxes completely destroyed.  I love the mail boss.

I was able to fix the door with a rubber mallet and get it from sticking. I would like to get a replacement flag.  Could I get a quote to replace?  I do need the plastic black attachment, flag and screws.  That was the part that was broken with the direct hit.

Ken’s all square with a new flag, and maybe the envy of the neighbors, who now have to go replacing their mailboxes. As we told Ken, we designed the Mail Boss to be vandal-resistant. We love to hear stories of the Mail Boss surviving run ins with cars, snow plows, baseball bats… and now pumpkins! If you have your own survival story, please don’t hesitate to share it with us!