The medications ordered through mail were supposed to arrive by June 3, but by the middle of the month it had not arrived at the Williamson Street location.

COMMENTS: Does the victim have a locking mailbox? If not, don’t be so quick to blame the USPS. It’s highly possible that the medication was stolen by an opportunistic thief. Crooks target unlocked mailboxes mostly for sensitive documents used for identity theft, but they also steal prescription medications. To prevent mail identity theft, as well as to make sure you receive your prescriptions, you should use a high security locking mailbox like the Mail Boss that can’t be fished by hand or easily pried open with a screwdriver.

(SALISBURY, NORTH CAROLINA) “Two 20-year-olds have been charged with 13 counts of injury to personal property after authorities say they took a baseball bat to mailboxes and seven cars in a nighttime spree that ended with a traffic stop.

And then the flood of 911 calls started with reports of more damaged mailboxes and cars with windshields and windows broken out. […] The locations include homes on Jasmine Circle, Grace Church Road, Airport Road, Miller Chapel Road, Maple Ridge Road and Strawberry Lane. The vehicles ranged from a 2006 Acura to a 1989 Jeep Cherokee, all parked in driveways or adjacent to the houses.”

COMMENTS: While mailbox vandalism is certainly not as serious a crime as mail identity theft in terms of the time and money required to resolve it, it is still very frustrating. No one likes being the victim of mailbox baseball. Instead of replacing your plastic or aluminum mailbox with another equally vulnerable to mailbox vandalism, opt for a more substantial option that can withstand a baseball bat and keep your identity safe. A locking mailbox made of heavy-gauge steel like the Mail Boss will do the trick! 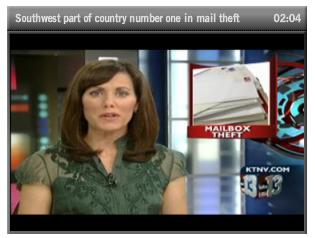 (LAS VEGAS, NEVADA) “Post office inspectors are saying Las Vegas is not alone in the fight against these mail thieves. The Southwest area is the highest in the country with these reported crimes.

Shocking security camera video shows the brazen actions of thieves who will do what they want with your correspondence.

“The mail is most generally pretty safe, but we have occasionally and from time to time some mailbox break ins at different parts of the valley,” says postal inspector Luke Caggiano.

Its not just Vegas either. Postal inspectors are working hard to fight a big problem in the Southwest part of the U.S.

“Which would include Arizona and parts of California. It’s definitely not unique to Las Vegas,” says Caggiano.

Postal inspectors seem to think methamphetamine users make up many of the thieves in this part of the country.

“People that do this are usually looking for some quick cash. They’re looking for credit cards, checks, bank account information, anything they can obtain that has personal information on it,” he says.

And the cluster mailboxes are a one stop shop for thieves says the postal service.

“Put the outgoing mail, just bring it to the post office. Put it in a blue collection box or maybe bring in the post office itself,” advises Caggiano.

“Just get your mail everyday. Don’t let it stack up. If you go on vacation or you’re going to be out of town, business or whatever it is, go ahead and let the post office know. and they can put a mail hold, so they hold the mail at the post office until the day you get back,” says Caggiano.

And the post office says the best thing to do is be vigilant of mail and report any suspicious activity. Postal fraud is a federal crime. If you see anything awry, any reports should go to the postal office.

Inspectors say even if you are not sure, it is better to be safe than sorry.”

COMMENTS: The best defense against mail theft is a high security locking mailboxes. It is unfortunate for people who live in areas with cluster boxes (CBUs) because they are very rarely secure and the thieves target these “one stop shops” as they said here. If I was supposed to use a CBU I would get a PO box or petition the USPS for curbside delivery. A good locking mailbox should be made of quality materials (not plastic or thin gauge metal), and not be able to be fished by hand or easily pried open with a screwdriver.

(NEW YORK, NEW YORK) “A Staten Island-based ring of Nigerian immigrants was charged with gaining access to the personal and financial information of at least 200 people, including active-duty members of the armed forces, and using it to steal in excess of $5 million before the scheme was stopped, officials announced on Wednesday.

The ringleaders recruited other low-level conspirators in five states, as well as in Nigeria, to launder stolen or forged checks, use credit cards and pick up mail, in exchange for a cut of the profit, officials said.

The list of victims included 27 banks and 20 members of the armed forces based in Fort Hood, Tex., including some who were serving in Iraq or Afghanistan at the time of the thefts.

“It takes a certain type of detached cruelty to victimize people in this way,” said Police Commissioner Raymond W. Kelly, who added that one member of the service returned home from duty for Christmas only to find his bank account cleared out.

After raids early Tuesday morning on private homes in Staten Island, Brooklyn and Queens, 26 people were arrested. A total of 33 people were indicted; 16 on felony charges of enterprise corruption; the others on lesser charges, including grand larceny. Seven of the indicted remained at large, the authorities said, and the investigation was continuing. […]

The thieves acquired some of the financial data by stealing mail, said Daniel M. Donovan Jr., the Staten Island district attorney. He urged residents to lock their mailboxes, monitor their credit reports and alert the police to any instance of identity theft.”

COMMENTS: We previously reported this story here. The Staten Island District Attorney got it right in recommending that consumers use a locking mailbox to prevent being victimized by identity thieves. Mail theft is one of the primary ways crooks can gain access to your personal information, so a security mailbox is a necessity to protect your good name.

The scam resulted in more than $5 million being stolen from accounts around the country, mostly drained from home equity lines of credit. Operating under a loose organizational structure, members of the ring stole identities to establish checking, investment and credit card accounts through Social Security numbers, and sometimes by stealing mail, police and prosecutors said.

They used underlings to launder stolen or forged checks, act as mail drops for compromised accounts or use stolen credit cards, authorities said. Participants received a percentage of the stolen money.

Police Commissioner Raymond Kelly said the investigation started after a woman from Libby, Mont., called the NYPD to report that someone from New York was stealing money from her checking account.

“That one call, transferred to the NYPD’s special frauds squad, led to the arrest yesterday of a ring that stole millions from unsuspecting victims,” Kelly said.

Twenty soldiers based at Fort Hood, many of whom were deployed, also were victimized, authorities said. Donovan said more than 2,500 attempts were made to obtain information or change their addresses or get checkbooks. Their losses totaled about $15,000, he said, and the bank put the money back in their accounts.

The suspects, mostly from Nigeria, Ghana and Liberia, face deportation.”

COMMENTS: Stealing mail was one of the primary ways these thieves acquired their victims’ personal information, and in fact is a very common method used for identity theft. Locking mailboxes are a necessity in the world today, with ID the fastest growing crime in the US. However, not all locking mailboxes are created equal.

Consumers need to look for a locking security mailbox made of quality materials like heavy-gauge galvanized steel. Also, you need a mailbox that can’t be fished by hand or pried open easily with a screwdriver. Make sure when selecting a locking mailbox that you keep these factors in mind, because many “secure” mailboxes on the market today are quite vulnerable to thieves.

The Mail Boss is a good security mailbox that can’t be fished by hand or easily pried open with a screw driver, and is available in Texas at your local Ace Hardware or True Value if you ask for it by name!

Stay safe – ID theft is a nightmare to resolve so prevention is key:

A 1990’s white Ford pickup was in the area at the time of the complaint. Anyone with information is urged to contact the Mecosta County Sheriff Dept. at 231-592-0150 or the tip line at tips@co.mecosta.mi.us”

COMMENTS: The Mail Boss security locking mailbox was designed with identity theft prevention in mind. However, due to its heavy-gauge galvanized steel construction and superior quality design, it also serves as a virtually vandal-proof mailbox. We are confident that the Mail Boss can stand up to the most severe baseball bat abuse, and can even withstand meddling with explosives. We haven’t tested the latter, but as soon as we can procure some TNT, we will be sure to post the video on our YouTube channel!

Don’t let identity thieves ruin your vacation. […] “When people are on vacation, they tend to let their guard down,” said Paul Stephens, director of Policy and Advocacy with the nonprofit [Privacy Rights Clearinghouse]. “They tend to be in unfamiliar places. They’re not going through their normal routines, so there’s a greater exposure to the possibility of somebody committing a fraudulent act.”

To avoid becoming a victim, he advises vacationers not to use or carry debit cards. […] Vacationers should clean out their wallets before leaving home, he added. […] Also, two credit cards are all you need–one of which will serve as a backup in case the strip becomes damaged on the other or the issuer shuts it down, he said.

“Financial institutions are being very aggressive in looking for fraud nowadays,” he noted. “Sometimes there are events that might occur that are not necessarily fraudulent which would cause them to shut down your credit card privileges. You don’t want to be stuck [on vacation] without a credit card that you can use.”

Here are other Clearinghouse tips:

COMMENTS: These are some good tips. However, it should be stated that people need to be worried about mail theft not only while they are on vacation, but always. Mail thieves are so brazen they will even follow the mail truck in broad daylight.

Most victims of ID theft don’t know how their ID was compromised and mail theft is a very large part of the equation. Consumers need to protect their identity:

(SAN JOSE, CALIFORNIA) “On Monday, January 11th […] agents of the Santa Clara County District Attorney’s Office Rapid Enforcement Allied Computer Team (REACT) arrested four people involved in identity theft at the Days Inn on Monterey and Senter Rd. in San Jose. Two of the people arrested were on parole for theft related crimes including robbery and being a parolee at large. Agents recovered several items of stolen mail, counterfeit mailbox keys and methamphetamine at the motel room used by the suspects. So far, the investigation has revealed an estimate of more than 100 victims of the identity theft operation. […]”

COMMENTS: It is not surprising that REACT task agents recovered methamphetamine along with stolen mail in their arrest. Identity theft rings are complex and will use any means necessary – frequently including stealing mail – to attain their victims’ sensitive information. Methamphetamine is most always associated with these kinds of identity thieves, who fund their habits with their victims’ good names.