Mesa man arrested on dozens of credit card thefts, fraud
AZ Central – 11/12/09
(MESA, ARIZONA) “Police recovered enough stolen property to fill a U-Haul truck after they served a search warrant on a Mesa man who was arrested in October while on bail for a forgery charge, police said. Christopher R. Cage was arrested Oct. 28 on numerous outstanding warrants after leading police on a car chase. After he fled on foot, he was pulled down by a police dog, but not before he dropped a backpack that contained stolen credit cards, stolen checks and a counterfeit driver’s license. Police also found 11 gift cards that had stolen credit card numbers loaded onto the magnetic strips.

Break-in leads to stolen property for 45 victims
Danville Express News – 11/12/09
(DANVILLE, CALIFORNIA) “Maybe Someone was watching as would-be burglars at a church inadvertently led police to stolen property from 45 recent victims. […] Employees at Rolling Hills Church […] in Danville apparently interrupted a burglary in progress […]. […] “Information was developed by Officer Murphy that led him to a residence […]. A search of a residence at this location led to the discovery of stolen property belonging to approximately 45 people from the central Contra Costa County area.”

[Two suspects] were arrested on suspicion of possession of stolen property, which was mostly documents, checks and credit cards, said Hoffman. “These items were primarily stolen from victims’ mailboxes, and also from vehicle and residential burglaries,” Hoffman explained. “A large majority of the victims were not aware that they had been a victim of mail theft.” Some of the stolen documents had been used to commit identity theft by the suspects, he added. […]” 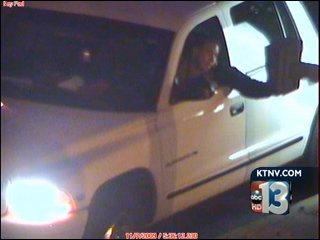 WTNV ABC – 11/11/09
(LAS VEGAS, NEVADA) “Neighbors in the Southwest part of the valley are sick of having their mail stolen.  […] “All the boxes on this side and all six on the other side are broken,” says George, who is unable to receive packages at his complex near Russell and Buffalo after all of the community mailboxes were busted open.

The thief has stolen everything from books, DVD’s, even an elderly woman’s medication. One thing the thief probably didn’t count on, was being caught in the act by the apartment complex surveillance cameras. He has hit the complex three times and at least once, had a female accomplice. […] Since mail theft is a federal crime, the Las Vegas Metro Police Department isn’t involved.  The neighbors have contacted postal investigators and feel like they’re not getting anywhere. […]”