On September 7, 2010, a Fort Smith resident reported a credit card mailed to him from a banking institution had been stolen from his mailbox. [emphasis added] He suspected someone was making fraudulent charges.

Investigators are trying to identify the man in the pictures taken from an ATM surveillance camera. He appears to be between the ages of 25-35. The vehicle pictured appears to be a silver late model four door passenger car.

Anyone with information on this incident is asked to call the River Valley Crimestoppers at (470) 78-CRIME.”

COMMENTS: The residential curbside mailbox houses highly sensitive information, including checks, bank statements and credit cards. It should go without saying that thieves are targeting mailboxes to steal sensitive materials for identity theft. To prevent identity theft, homeowners need to be vigilant and use a high security locking mailbox. Also, never send sensitive mail from your mailbox; bring it to the post office, or better yet use online bill pay – it’s more secure!

(CHESTERFIELD, MISSOURI) “A mail box thief is cashing in on a quiet Chesterfield neighborhood. Five victims saying someone accessed their bank account after stealing their mail. It happened in the Clarkson Grove neighborhood , where mailboxes are bunched together in front of some of the condos. Residents were surprised to find their mail stolen and their bank accounts accessed.

“I’m shocked how easily they could get money out,” said Bobbe Weintraub, a mail theft victim.

“All of a sudden it said fraudulent, forgery activity on this account,” said Barbara Conrow, another mail theft victim.

Chesterfield police believe the thefts were isolated to that one neighborhood.

One of the victims says she was aware of five thefts. Victims tell us thieves stole outgoing checks then created their own checks using information from the stolen mail. They managed to cash those checks at a bank. Now some of the victims fear identity theft is next.

“They’ll go somewhere and buy furniture equipment the bill comes to your home and you never bought any of that and those people are long gone now it’s going to be against your credit because you’re not paying that bill,” said Conrow.

They were arrested in March in Highland.

They too attempted to convert checks into cash.

Police do not have any suspects in the Chesterfield thefts but are checking with other agencies to see if there are any similar crimes in the area.

Conrow is going door to door with her own crime alert flyer to try and stop the crimes or at least warn others to be alert.

All the attention is getting other residents involved.

“It’s actually started a whole initiative with the neighborhood watch and getting the Chesterfield police involved and how we can protect ourselves better,” said Rob Moss, Clarkson Grove resident.

COMMENTS: Thieves target incoming mail to steal sensitive information to use for identity theft, and most victims do not necessarily realize when their mail has been stolen. Mail theft is on the rise, and the first line of defense should be a security mailbox that can’t be fished or pried open. The postal carrier deposits the mail through a secure incoming mail slot, and you retrieve your mail with a key, but it keeps out would-be identity thieves. Rick’s Ace Hardware in Chesterfield carries the Mail Boss – a high security mailbox that will prevent mail theft.

(DECATUR, ALABAMA) “On July 28, Wanda Kimbrough filed a report with the Decatur Police Department after she had discovered a box of her bank checks had been stolen and forged at several businesses in Decatur. 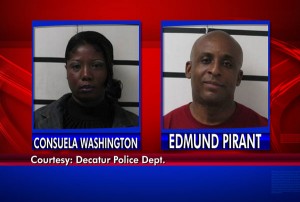 The checks were believed to have been stolen from her mailbox in southwest Decatur. [emphasis added]

During the investigation, detectives developed Consuela Washington and her boyfriend, Edmund Pirant as suspects in the case.

On September 28, Washington and Pirant were arrested by Decatur PD and booked into the Decatur City Jail, and then later transferred to the Morgan County Jail on charges of possession of a forged instrument.

COMMENTS: Criminals target residential mailboxes to steal sensitive information including bank statements, credit card offers, medical bills and other documents to use for identity theft. If they’re lucky they hit the jackpot with a box of checks! With 11.1 million victims of identity theft last year, Americans need to take precautions. First and foremost, safeguard your personal information and physical documents at their source: the curbside mailbox. A high security locking mailbox like the MailBoss prevents mail identity theft and gives you peace of mind.

(DOWNERS GROVE, ILLINOIS) “10:44 a.m.: A resident reported mail stolen from Fairway Grove Condominiums in the 2400 block of Ogden Ave. The mail, left in an outgoing mail bin of the building, was believed to have been taken between 10 p.m. Sept. 24 and 10 a.m. Sept. 25, before the mail carrier picked up mail from the location.”

COMMENTS: It is important not to send sensitive outgoing mail and checks from unsecured locations. Thieves target unsecured collection areas to steal mail that can be used for identity fraud. It is also important to prevent theft of incoming mail to guard against identity theft. Use a high security locking mailbox like the Mail Boss to keep your sensitive information from would-be identity thieves.

COMMENTS: More mail theft…. seriously, with 11.1 million victims of identity theft last year, why do people still use unlocked curbside mailboxes?? Everyone destroys sensitive documents before throwing them away – and these all pretty much come in the mailbox! Time for a high security locking mailbox like the MailBoss that can’t be fished by hand or pried open with a screwdriver. Plus, weighing in at 40lbs, it’s baseball bat proof!

The Belleville News-Democrat reports that 42-year-old Felicia Johnson of Cahokia was ordered to spend two years in prison while her son, 25-year-old Marquan Johnson, got a one-year term. Each also was sentenced to three years of post-prison supervised release.

Both pleaded guilty June 1 to charges of mail theft and possession of stolen mail.

The Johnsons have been in custody since March, when they were arrested by Highland police after a resident there reported someone took his mail.”

COMMENTS: These two followed mail trucks in broad daylight to steal incoming – not outgoing – mail from residents. This shows how brazen mail thieves are to obtain their victims’ information. In other words, simply retrieving your mail promptly or never leaving mail in your mailbox overnight is not adequate defense against the growing crime of mail-identity theft. A high security locking mailbox like the MailBoss is necessary to protect yourself.