Topekan charged in fraud
The Capital-Journal – 1/7/10

(TOPEKA, KANSAS) “Two people, including one from Topeka, were indicted Thursday […] for conspiracy, bank fraud, aggravated identity theft and theft or receipt of stolen mail. Robert L. Maxwell, 45, of Topeka, and Marcella D. Machado, 46, of Olathe, were charged on allegations that they obtained information relating to the identity of other people and attempted to negotiate stolen checks throughout Kansas using stolen identities. […]”

(BROOMFIELD, COLORADO) “Dec. 30-A mail drop box in the 900 block of East First Avenue was damaged and entered. Mail was stolen. Loss/damage, unknown.”

(KINGMAN, ARIZONA) “A Bullhead City man allegedly involved with seven others in a series of mailbox thefts in the Bullhead City area accepted a plea agreement Tuesday. […] Under the plea agreement, [the judge] will sentence Welch to three years in prison when he is sentenced Jan. 26. The defendant must also pay more than $32,500 in restitution.

[…] Police searched a home and allegedly found stolen mail and homemade counterfeit keys used to break into cluster mailboxes in 10 neighborhoods throughout the Bullhead City area. […] Jackman was arrested the next day in Bullhead City [Arizona] in connection with the alleged mail thefts. […]”

(SACRAMENTO, CALIFORNIA) “If you were expecting a holiday card that never arrived, you might not have been snubbed by your friends. Authorities in California said they have arrested a man accused of stealing hundreds of pieces of mail from people’s mailboxes. Officials said Keith Allen Skipper, 35, is suspected of taking gift cards, checks and cash from holiday cards and letters.

[…] Federal investigators believe Skipper is to blame for the missing mail. Tuesday, he was taken into federal custody and charged with mail theft. In early December, Nevada County sheriff’s investigators said they caught Skipper red-handed, inside his car, with more than 240 pieces of mail that was not his.

[…] Skipper was arrested and released on bail. Weeks later, investigators said just days before Christmas, he struck again. Deputies caught him again, and this time, federal authorities said Skipper will not be skipping out of jail anytime soon. If convicted, Skipper could face up to 20 years in prison.”

(SACRAMENTO, CALIFORNIA) “A Northern California man is facing federal charges after authorities say he was caught with stolen mail just before the holidays. Prosecutors say Keith Allen Skipper was taken into federal custody Monday on suspicion of theft of U.S. mail and possession of stolen U.S. mail.

A federal complaint alleges the 35-year-old Roseville man was found with nearly 200 pieces of mail belonging to other people when he was stopped by El Dorado County authorities for a minor traffic violation on Dec. 22. At the time of his arrest in El Dorado County, prosecutors say Skipper was free on bail after being arrested on suspicion of stealing mail in nearby Nevada County earlier in the month. […]” 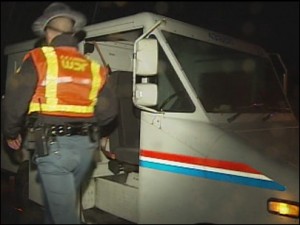 (VANCOUVER, WASHINGTON) “A woman was arrested after she stole a mail truck and led police on a bizarre New Year’s Eve chase from downtown Portland, Ore., through Vancouver, Wash., and up into Clark County on Interstate 5, police said. The chase began when Washington State Patrol troopers went after the stolen mail delivery truck that was speeding up the freeway. […]

State troopers in Clark County spotted the truck speeding north on I-5 as containers fell from the truck’s open back end […]. […] The truck continued north up the freeway even as patrol cars chased after it with emergency lights flashing and sirens wailing. State troopers finally used nail strips to puncture three of the vehicle’s tires.

The driver pulled off at La Center, ran from the truck and was captured at a nearby gas station. Authorities initially believed the woman was a postal employee because she wore a blue vest, but that was not the case […]. Trooper said the woman didn’t have any identification on her and was less than cooperative after her arrest. “She won’t tell us anything,” said a trooper at the scene. “Won’t talk to us at all. Spit at us a couple of times, but won’t talk to us.”

U.S. Postal Service authorities were not available for comment.”

(YAKIMA, WASHINGTON) “The season of giving, shouldn’t involve gift-wrapping your personal information to thieves looking to use your personal information and credit card for a little holiday shopping. “Fraud isn’t just someone stealing a check and writing it. There’s a lot of activity that people are into,” […] the Yakima Police Department says. And it’s exploded in Yakima over the last decade, growing more than 10 times since ’99.

It may have something to do with the ease of credit card and ID theft. […] “15 years ago there were some pretty serious risks involved in using or attempting to use a stolen credit card. Now there’s almost no risks.” The convenience companies have created to make it easier for you to do business, may have actually made it easier for crooks. When you go to pay for something like gas, you don’t ever need to see a person. Swipe your card and be on your way, whether the card belongs to you or not.

[…] It may be even easier to get the information. A check in them mail with the flag raised might as well be a bull’s-eye for people looking to rip you off. “We do see quite a bit of that mail theft going on. And sometimes people can get some good information if they’ve got a credit card being delivered to a location,” […].

If you can, bank online. And pick up your checks or debit cards instead of having them delivered. Your e-mail inbox may be overrun with potential scams, but the mailbox outside your house may offer thieves an even easier way in.”

(MORGAN HILL, CALIFORNIA) “Morgan Hill Police are looking for more victims of mail theft after two residents were arrested on suspicion of possessing stolen property, including checks and other mail from West Edmundson Avenue, police said.

Mario Canas, 46, and Evelyn Ortiz, 50, both of Morgan Hill, were arrested Dec. 26 at the Executive Inn at 16505 Condit Road, where they were living, Sgt. Jerry Neumayer said.

Officer Demetrick Caballero approached Canas, who was standing outside the Executive Inn about 5 p.m. that night. Neumayer said Caballero thought Canas looked suspicious. Canas was under the influence of methamphetamine, was on probation and had a no-bail warrant for possessing and receiving stolen property. Canas and other officers went into the room Canas shared with Ortiz. She was in the room and also under the influence of meth.

Police have confirmed two of the victims, both Morgan Hill residents. There are at least six other possible victims, Neumayer said. If anyone believes their mail was stolen within the last two weeks, contact Morgan Hill Detective Ken Howard at 779-2101.”

(BOULDER, COLORADO) “Hundreds of Boulder County residents have had their mail stolen in the last two weeks, and investigators think the thief or thieves are looking for credit cards or gift cards. From Dec. 14 to Dec. 16, sheriff’s officials received reports from 35 mountain-area homeowners with missing mail. There are now at least 375 confirmed reports.

Postal inspector Rich Sheehan says the U.S. Postal Service is offering up to $2,500 to catch the culprit. Mail theft is a federal offense punishable by a fine of up to $250,000 and up to five years in prison.

(ALLENSPARK, COLORADO) “The U.S. Postal Inspection Service is offering a reward of up to $2,500 for information leading to the arrest and conviction of individuals responsible for recent mail thefts in Boulder and Larimer counties. The December thefts have been from mailboxes in the 80540, 80517 and 80510 ZIP codes in the Lyons, Allenspark and Estes Park areas. […] [Postal Inspector Sheehan] speculated that the thieves might be looking for gift cards, credit cards or other financial instruments that often show up in the mail before Christmas.

The Sheriff’s Office reported last week that mail thefts had been reported from such locations as Apple Valley Road, Jasper Drive, Quartz Way, Flint Gulch Road, Antelope Drive, Buttonrock Road, Conifer Hill Road and Longmont Dam Road. Also being checked out, as of last week, was information that other thefts had happened at residences in the South St. Vrain Canyon, the North St. Vrain Canyon and Stone Canyon.

Sheehan advised that people try to pick up their mail as soon as it’s delivered and not let it sit overnight. People planning to be away from home, even for a day or two, should put a hold on their mail deliveries, Sheehan said.

Anyone with information about the mail thefts can call postal inspectors at 877-876-2455. Mail theft is a federal crime, with the penalty for a convicted violator including a fine of up to $250,000 and up to five years in prison. […]” People who find mail in the areas hit by thieves are asked to return it to either the Lyons or the Allenspark post office.”

(BOULDER, COLORADO) “Hundreds of Boulder County residents have had their mail stolen in the last two weeks, and the U.S. Postal Service is offering up to $2,500 to catch the culprit. From Dec. 14 to Dec. 16, sheriff’s officials received reports from 35 mountain-area homeowners with missing mail. There are now at least 375 confirmed reports.

Postal inspector Rich Sheehan says investigators think the thief or thieves are looking for credit cards or gift cards. Mail theft is a federal offense punishable by a fine of up to $250,000 and up to five years in prison.”

(LONGVIEW, WASHINGTON) “At least a dozen Longview residents had their mail – including Christmas cards – stolen or tampered with Tuesday, and police say the “grinch” is a 17-year-old boy. A regional postal inspector has been called in to assist with the case and help return the mail to its intended recipients.

Police were called Tuesday when someone witnessed a young man going through several mailboxes in the vicinity of 34th Avenue and Nebraska Street. The report said the teen would take mail out and go through it, discarding some, placing some in his backpack and moving the rest to the next mail box. Police found several piles of mail in the street near mailboxes, according to the report.

A 17-year-old Longview boy was pointed out as the suspect when police arrived. Several pieces of mail and a sweatshirt with a shipping tracking number were found in his backpack, according to reports. The mail found in the backpack included Christmas cards as well as envelopes from the state Department of Social and Health Services, according to the report.

[…] The boy was arrested and booked into the Cowlitz County Juvenile Detention Center on 12 counts of third-degree theft and 12 counts of possession of stolen property in addition to a malicious mischief charge and possession of marijuana. […] The regional postal inspector took custody of the discarded mail and was working with police to get permission from the recipients to open and photocopy the mail in custody to help the investigation, according to the report.”