Here is another typical mail identity theft story out of Phenix City Alabama featuring a pair of career criminals with the common elements of stolen mail, compromised identities, and drugs. Lovely. 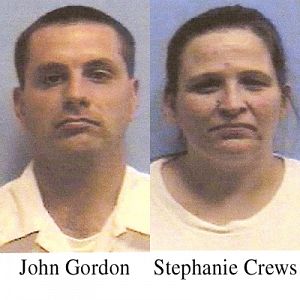 Mail identity theft is among the fastest growing crimes in the nation, but is easily prevented with a security locking mailbox and a little common sense. Once your incoming mail is secure in a locked mailbox, you cover most of your bases by only sending outgoing mail in a secure mailbox (the Blue USPS kind) and shredding incoming mail before discarding it.

A federal indictment for felony theft or receipt of stolen mail was returned against two people already serving time in the Alabama prison system for charges in Houston and Coffee counties.

According to court records, a federal indictment was returned last week and unsealed Tuesday against Stephanie Leeann Crews and John Joseph Gordon. Records show Crews, 41, and Gordon, 30, both of Phenix City, were each being held at state prisons. Crews was being held at the Montgomery Women’s Facility and Gordon at Kilby Correctional Facility.

The federal indictment charged both people with aiding and abetting each other in either the theft of and/or possession of mail on or about Jan. 25, 2006, in Enterprise. The indictment did not indicate what type of mail was involved in the crime.

State court records show both people had previously pleaded guilty to multiple felony counts of second-degree possession of a forged instrument in Coffee and Houston counties with offense dates throughout the month of January 2006.

According to state court records, Crews previously pleaded guilty in Russell County to three felony counts of unlawful possession of a controlled substance.